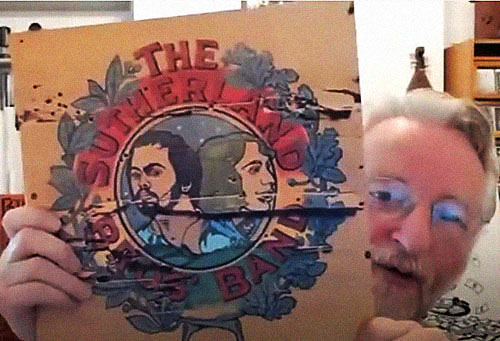 By A. Woodley
Format:Audio CD|Amazon Verified Purchase
Here’s the deal: the majority of this material has been available for years now. If you’re looking at this, then you probably already own Mermaid Avenue volumes one and two. You may even own the documentary Man in the Sand, but there is no way you own Mermaid Avenue Volume Three. I won’t go into depth about Volumes one and two. They are awesome, but you already know that. The documentary is truly entertaining. It follows Billy Bragg as he tries to track down the real life of Woody Guthrie and starts to work to create music for the already penned Guthrie lyrics. The lyrics are amazing. It is easy to forget that Woody Guthrie was such an amazing lyricist and truly ahead of his time, but this set will drive that point home. I know what question you’re asking: Why the heck should I buy a box set where I already own 2-3 of the disks? The answer is Mermaid Avenue Volume Three. This volume is filled with out takes from the Mermaid Avenue sessions. Some of the tracks like Bug-Eyed Jim, My Thirty Thousand, and When the Roses Bloom were maid available on an EP years ago. They are some of the stronger tracks on the album, but there are still 14 tracks you’ve never heard. All 17 tracks are worth your time though. Like me, you might resent having to pay thirty bucks to rebuy albums you already own. I get it. I really do wish they sold Volume Three as a stand alone album too, but that’s the nature of the music biz. Sell you the same stuff over and over at inflated prices. We all resent it, but if you’re a fan of the Mermaid Avenue stuff, you’ll want this album. I do believe Amazon offers Volume Three as a stand alone purchase but for download only. I’m outdated. I don’t mind downloading, but I truly would rather own a hard copy. Plus, I don’t mind supporting Billy Bragg or Wilco a little more. The set itself it pretty nice. It does come with a hefty booklet with photos, lyrics, an essay by Woody’s daughter Nora, and little hand written sayings/ notes from Woody himself sprinkled throughout. This was originally released on Record Store Day 2012, but I hope they keep it in print for much longer. Since it was released on RSD 2012, I wish they would have pressed it on vinyl as well, but that doesn’t really belong in a review of the music. If you’re looking at this, you’re probably just trying to decide whether or not to drop thirty bucks for a set full of tracks you already own. If you’re contemplating that though, you are probably a huge fan, which means in the end, yes, you’ll want to drop the thirty bucks.
4 de maio de 2012grosseria, lançamentobilly bragg, wilcomauval